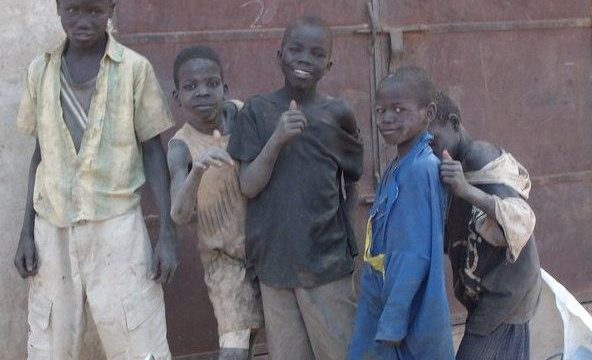 Bol’s Mission:   “I am a proud American citizen because of what this country can offer people like me who are denied citizenship rights in their own countries. It is important for young Americans, our future leaders, to be educated on the tragically complicated situation in Sudan. It has been called a modern-day genocide. I am blessed by God to have lived through it, and now I want to help others. That is why I continue to share my story here in America and why I believe it is up to us, the younger generation of Sudanese, to step up, leave the comfort of the US and lead South Sudan and its people where they need to go.”

1987:  Bol’s village, Chawong, was attacked early one morning by thousands of mujahideen on horseback, armed with AK 47s and machetes.  They killed the older males and many of the women.  The rest, along with the children, were beaten and rounded up.  They were forced to march on foot, prodded by heavy sticks, three days to Al Fashier in the northern part of Sudan near Darfur.

A few weeks later 7-year-old Bol was sold to Ali Abdullah, a wealthy landowner in the Nyala region. At first rebelling, Bol was beaten many times and locked up in chains at night, before he settled down and won Abdullah’s trust to go out in the fields alone and tend the cows.  He slept in the rain with the cows and ate whatever leftover garbage he could find.

1990:  Bol, while tending cows in the fields, was able to jump aboard a train bound for Khartoum and make his escape.  With the help of two fellow Dinkas, Bol found a refugee camp and was allowed to attend school but it was run by Islamic teachers. He was forced to speak only Arabic and practice the Islamic faith.

1998:  Bol was smuggled out of Khartoum to Egypt via “underground railroad.”  He was a teenager and life there was hard, “There was no hope in Egypt. They “had no respect for Africans either.” He and others survived with the protection of their tight-knit Sudanese community.

June 1998:  Bol learns the UN was offering asylum to victims of Khartoum’s violence.  A Sudanese student wrote up Bol’s story in English and sent it to the UN Cairo office.  He was one of many granted an interview.  He was only one of ten who were allowed to take the next step.  He was then vetted by UN attorneys and sent for medical checks.

Aug 24, 1999:  The Council of Churches matched Bol with St. Bartholmew’s Episcopal Church in Richmond and he was given help for 6 months.  He spoke little English.

2004:  Co-founded the Aweil Youth Association, USA (AYA).  AYA is an organization to unite the children of Sudan, many of whom were enslaved, to promote democracy and human rights in Sudan.

2007:  Bol founded “Total Access Preparatory Academy” (TAPA). It helped Sudanese and other African women learn English, math and computer skills to equip them for better paying jobs in the United States. Bol recruited his former professors and VCU supplied classroom space.  Seventy students from nine countries have been through the classes preparing them to test for a GED and assisting in their pursuit to obtain American citizenship.

Bol believes that providing women access to education will put them in a better position to provide an education for their children.  TAPA’s mission also focuses on women’s leadership roles.  Ninety percent of women in Sudan cannot read or write; rape is an ongoing fear and Sudan has the highest rate of maternal deaths in the world. The struggles of Sudanese women have largely been ignored.   Bol strongly believes it is the women who could lead the way to peace in Sudan.  They need their human rights restored and a safe place where they can flourish and find their own “voice.”

2008:  “Black History in the Making” Award from VCU Department of African American Studies.

2008:   Graduated from Virginia Commonwealth University with degrees in Homeland Security and Political Science.

May 2010:  SSP participated in Time for Change concert in Orlando, Florida which was attended by Sudan Special Envoy Scott Gration.

Summer 2010:  Sudan’s unfair elections resulted in sustained fighting and the arrest and exile of several independent political  candidates.  Bol worked with US Representatives to initiate a meeting between those candidates and the Foreign Relations Committee.

2012:  Founded “African Kauda,” a nation-wide group that prayed to overturn South Sudan President Salva Kiir’s secret sale of Aweil land (known as 14 mile) to the Khartoum regime.  When the story broke in the media, Aweil leaders tried to claim the land.  African Kauda met regularly to pray for Aweil’s success.

Sep 16, 2011:  AYA and a coalition of other human rights groups, including the “Marginalized People of Sudan’ rallied at the United Nations, protesting the criminal actions of President Omar al Bashier’s Khartoum regime.  Out of that protest came a “think tank” on the subject of Sudan genocides at the Desmond Tutu Center in NYC on November 25, 2011, which was attended by representatives of areas in the Sudan, including Blue Nile, Darfur, Nuba Mountains, Abyei, Beja, and Nubia.

July 11-13, 2012:  Bol’s SSP organization in conjunction with non-profit American Epiphany held a “Fieldman’s School” in Richmond to teach political campaign organization to Sudanese activists from across the United States and Canada.

September 2017 to present:  Kicked off campaign for President of South Sudan.  Ongoing meetings with State Department, US Mission to UN, Members of Congress,Sudanese groups and representatives from refugee camps in East Africa to promote scheduling of free, fair elections in 2018.

October 13, 2017:  Helped organized rally in Lincoln Park across from the White House to protest the lifting of long-time US sanctions against Sudan.  President Trump reimposed the sanctions a short time later.